“Random Words” is a new series I am hoping to produce every once in a while. The point of it is not so much to teach you one new word, but rather to explore what other words come up through association. Today: heinä!

If you’re truly passionate about expanding your vocabulary, you’ll grasp at any chance to further your knowledge. One way to do this is to just explore one word, its associations and all kinds of little things related to it. 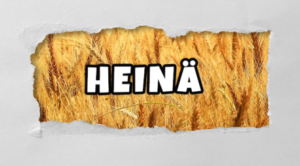 The first of this series of Random Words is HEINÄ. Heinä means “hay”.

If you’ve made a start learning Finnish, you’ve probably come across this word when you were learning the names of the months. Heinäkuu is July. It’s not difficult to see the association: heinäkuu was an important month for Finnish farmers, who used to cut and collect their hay in July.

Heinä usually wasn’t farmed on fields (pelto) but rather on meadows (niitty). The fields were reserved for different kinds of grain (vilja) for human consumption (e.g. kaura, ohra, ruis) rather than food for livestock (rehu). Haymaking (heinänteko or heinänkorjuu) was considered such an important event that people actually dressed up for it in clean, light-colored clothes!

Before hay mowers (niittokone) were invented, farmers used scythes (viikate) for collecting the hay. They gathered (korjata) the hay and let it dry in the sun.

Heinä is also used in a couple of Finnish sayings:

Can you think of any other words that are connected to heinä?
Which words do you think are most useful from the above?

Let me know in the comments!

This site uses Akismet to reduce spam. Learn how your comment data is processed.

Hi! People put light clothes on during hay making not because of holiday mood (it is a hard labour), but to avoid sun shock.

Uusi kielemme in other languages

Support me via Paypal!